Following this week's Alien Day, NECA have unleashed previews of their upcoming Aliens series 9 lineup and one of their Series 9 figures was modeled after a scrapped Aliens movie concept - the Albino Alien! Originally conceptualized to act as helpful Drones to the Alien Queen, these Albino Aliens were intended to be smaller than their Warrior counterparts and feature a long proboscis in place of the inner-jaw, which they would use to secret resin to build the Hive and move around the Queen's eggs. The idea was ultimately scrapped, but NECA have revived this concept in the form of a 7-inch tall figure! Also included in NECA's Aliens Series 9 are highly detailed and film-accurate figures of Pvt. Vasquez and Pvt. Frost, both USCM marines from James Cameron's Aliens: 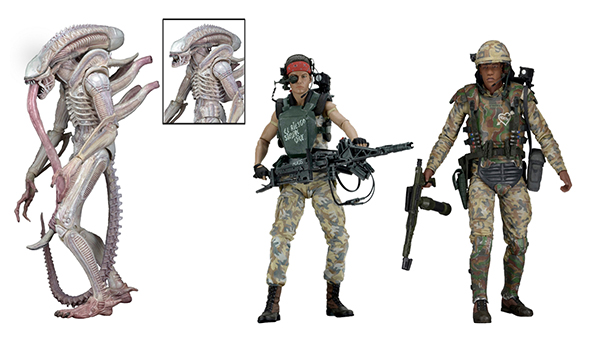 NECA's Aliens Series 9 will release this September! Check back often for more news on all things Alien!

If such a Role Existed then i would have had it have a different head.. as the Dome Carapace is Xeno Warrior looking...

It's funky looking. But unique.

I actually like it more than
The warrior.
Is it similar in size or smaller
Then the warrior?

This was an awesome idea... I had always wondered who built the hive from secretions... (The Queen or her drones and warriors). This would explain a lot... I don't understand why Cameron wouldn't include them (even a few in the background) during Ripley's and the Queen's 1st encounter.

Plus a few of these would look great with my massive Alien hive diorama...

@BigDave, yeah it's clearly a repaint and mod of the existing Alien Warrior model. Initially these Drones would not have been as large either.

@AutomatedChaos, I agree it would've been cool to even see them in the background of the Hive upon Ripley's encounter with the Queen. It's fascinating how many concepts never actually make it to the final cut.

Here's an excerpt from the 1st draft of ALIENS:

Finally, the answer to the question, "What if a facehugger got a hold of Gene Simmons?"

I like it. Looks like they'd be more adapted to a sand or snow planet or something. Awesome.

ninXeno426 started a new discussion: So about that inequality... (Noah Hawley on the Alien Hulu series) on the Alien: Covenant forum